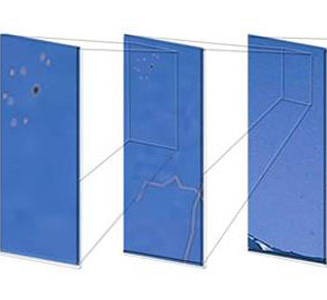 The Eye Floater Phenomenon – Between Science and Religion

Nestor, who calls himself a seer, ascribes this subjective visual perception to his long lasting efforts to develop his consciousness.

In the mid-1990s I met a man named Nestor living in the solitude of the hilly Emmental region of Switzerland. Nestor has a unique and provocative claim: that he focuses for years on a constellation of huge shining spheres and strings which have been formed in his field of vision. He interprets this phenomenon as a subtle structure formed by our consciousness which in turn creates our material world. Nestor, who calls himself a seer, ascribes this subjective visual perception to his long lasting efforts to develop his consciousness.

In history of religion and art, a multitude of cases are known in which spiritually committed individuals report about abstract or figurative subjective visual phenomena they experienced – often while in ritually induced altered states of consciousness (cf. Tausin, 2010b; MüllerEbeling, 1993). Usually, these phenomena are interpreted in terms of the cultural and religious tradition of the individual. Nestor’s case, though, seems to be exceptional in two regards: First, Nestor himself is aware of, and considers, the ophthalmological explanation of his visual experience, known as “eye floaters”. And second, floaters are a common and wide spread phenomenon, experienced by a lot of people who do not claim to live a particularly religious or spiritual life.

In the course of a learning time with Nestor, I tried to understand the phenomenon from an ophthalmological point of view, as well as from my own observations. My objective was to comprehend Nestor’s claims about the spiritual relevance of this phenomenon (Tausin, 2009a). In this article I will address the following questions that I have been considering in the process:
1) What are floaters?
2) What makes Nestor think of floaters as a spiritual phenomenon?
3) Are there any equivalents in the history of science and religion to understanding floaters in terms of spiritually relevant visionary experiences?
4) Does Nestor’s claim require a new ophthalmological understanding of eye floaters, and how so?
5) Is it reasonable to think of floaters as a spiritual phenomenon, and to what extent…