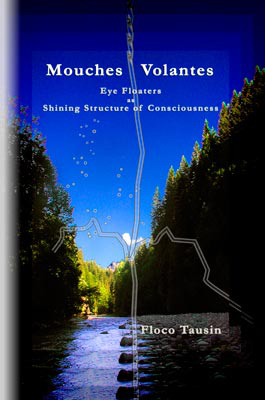 Alternative
Order from your ebook shop

Order from your ebook shop or
smashwords.com

Floco Tausin tells the story about his time of learning with spiritual teacher and seer Nestor, taking place in the hilly region of Emmental, Switzerland. The mystic teachings focus on the widely known but underestimated dots and strands floating in our field of vision, known as eye floaters or mouches volantes. Whereas in ophthalmology, floaters are considered a harmless vitreous opacity, the author gradually learns to see them and reveals the first emergence of the shining structure formed by our consciousness.

»Mouches Volantes« explores the topic of eye floaters in a much wider sense than the usual medical explanations. It merges scientific research, esoteric philosophy and practical consciousness development, and observes the spiritual meaning and everyday life implications of these dots and strands.

Additional texts from the ebook

What are these dots and strands floating in our field of vision and becoming visible in bright light conditions? In ophthalmology they are known as »vitreous opacities«, also called »mouches volantes«. Patients in search for treatment are put off with the argument that the phenomenon is harmless and not effectively treatable. In this book, the author Floco Tausin introduces the radically opposite conclusion of the seer Nestor living in the Swiss Emmental: according to him, the »flying mosquitoes« are the first emergences of a shining structure formed by our consciousness; the mystical entering into this structure allows us human beings to become one with the picture.

The reader will not only find a report of experiences in the form of a mystic tale in this ebook; he or she will also be exposed to the practical way of life and ecstasy techniques of the seer Nestor that are required to arrive at a novel and challenging wealth of knowledge: the fact that seeing mouches volantes is closely interconnected to our consciousness and its state of development. The book »Mouches Volantes« is a practical and entertaining companion for all those who choose to lead a life of conscious awareness.


Additional texts from the ebook

Floco Tausin is a Graduate of the Faculty of Humanities at the University of Bern, Switzerland. In theory and practice he is engaged in the research of visual phenomena in connection with altered states of consciousness and the development of consciousness.

My name is Floco Tausin. I'm an author and a graduate of the Faculty of Humanities at the University of Bern, Switzerland. For many years, I have devoted myself to the exploration of consciousness and exceptional states of consciousness through thinking, feeling, and my own experiencing. The acquaintance with Nestor, a seer living in the Emmental region in Switzerland, led me to a holistic study of so-called eye floaters or mouches volantes. Ever since, I'm engaged, in theory and practice, in the research of visual phenomena in connection with altered states of consciousness and the development of consciousness. My experiences and time of learning with the seer Nestor are subject of the spiritual novel "Mouches Volantes - Eye Floaters as Shining Structure of Consciousness" which was published recently.